This Chunshui Decorative Jade Button was unearthed from the joint tomb of Qian Yu and his wife in Yuan Dynasty at Yaogeli in the southern suburb of Wuxi. It is white jade and has a warm jade quality. Because it has been buried underground for more than 600 years, the body is covered with soil and gray spots.It is oval, with a slight bulge in the middle, and a flat ring at the bottom, engraved with a "chunshui" pattern. The so-called "chunshui" refers to the scene where the northern aristocrats of the Liao, Jin, and Yuan dynasties hunted swans during their encirclement hunting in spring.This jade is set with water, lotus, reeds, etc. as the background. A sea bird on the top is looking for prey, and a swan below panicked and sneaked into the lotus pond to hide. The overall design of the pattern shows the simple and unsophisticated mountain and forest.It is in the shape of a pipa, with a flat and wide hook head, decorated with inscribed lotus, carved with lotus and aquatic patterns on the belly, and a bridge-shaped button on the back with a rectangular hole.Its craftsmanship and style are basically the same as those of Chunshui Yuhuan.

From the point of view of the production process, this chunshui jade button is divided into four layers, rich in patterns, and uses a combination of light carving, deep carving and engraving.The jade has obvious grinding marks on the back, with sharp edges and corners, making the lines more simple, tough, and thick, giving people a reasonable layout, well-proportioned, and unpretentious feeling. It is a fine product in the same themes.The decorative jade button is a belt tool on the men's belt in ancient China. It is divided into jade belts for official clothes and jade belts for casual clothes. The jade belt of official clothes is generally used in formal occasions.Official jade belts from the Han Dynasty to the Tang Dynasty have formed a formal jade belt system, which is a symbol of the user's identity and status.The jade belt of casual clothes is mainly used for daily casual clothes ofliterati.There are also regulations for jade belts for casual clothes. It is an extension of the official system in daily life. However, in the Song and Yuan dynasties, jade articles were gradually secularized.

This jade button, with ingenious design and fine carving, can be called the finest piece of jade carving craftsmanship in Yuan Dynasty. Its hook and interlocking shape is the only set of unearthed standard instruments in the country that has been seen so far, and it is also an important reference for identifying similar jade articles. 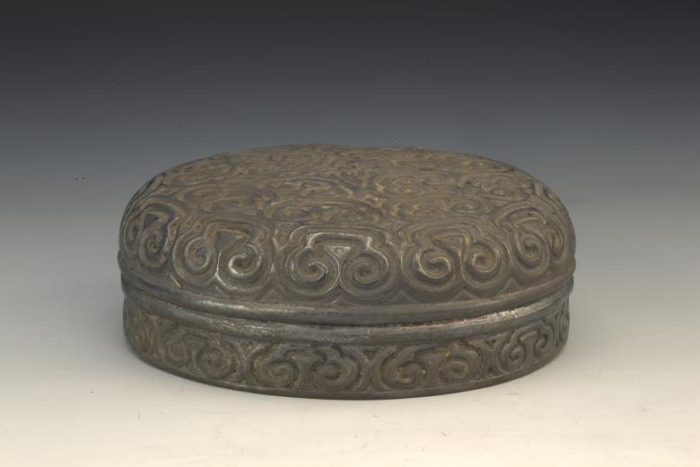 It is national secondary cultural relics, with oblate shape, arc-shaped edge of the cover.The box cover and the outer wall are molded and punched with floral patterns and ruyi patterns, a regular four-flower pattern in the center of the cover, surrounded by the ruyi moire , 4 pieces on the first layer, 8 pieces on the second layer, and 12 pieces on the third layer, arranged in a radial pattern.These concavo-convex ruyi moire patterns are popular patterns in lacquer boxes and silver boxes in the Song and Yuan dynasties, such as the lacquer and silver boxes unearthed from the Song Tomb in Chayuan Mountain, Fujian.The bottom center of the box is divided into two rows of embossing, with a monogram after the inscription, which shows that the box was made by a private craftsman. 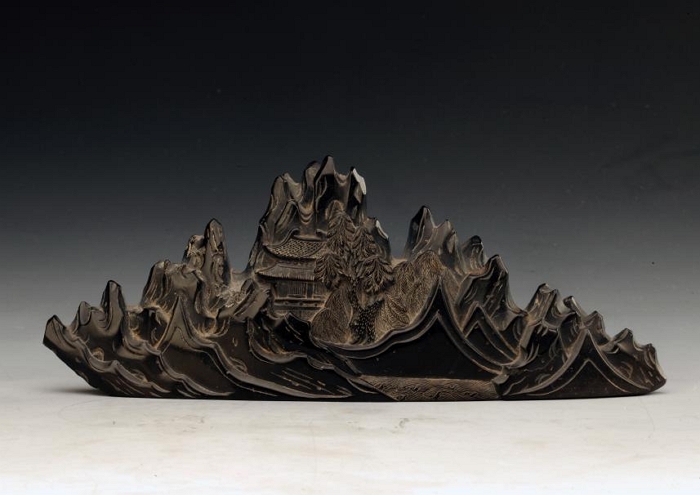 This pen holder, national secondary cultural relics, was collected from Guangyi Commune in the suburbs of Wuxi in March 1978. The pen holder is plain black, with the texture of Chu stone, which looks simple but natural and ingenious.It is in the shape of distant mountains as a whole. The middle of the mountains is gradually lowered on both sides, and the heights are staggered. There are no less than dozens of hills.From the front, in the distant mountains, there are lush green trees, pavilions, towers and pavilions, half-covered and half-dew, under the mountains is surging water, and a boat is sailing out of the mountains. The back of the pen holder is very meticulously depicting a two-story pavilion and lush trees, and the patterns of the pavilion railings and the texture of the trees are clearly visible. The smooth lines and ingenious layout layered the front and back, creating a spatial depth, creating an artistic conception of intertwined mountains and ancient Tibetan temples deep in the mountains. The front and back sides of the pen holder are perfectly integrated, echoing each other, like a vivid landscape painting. The edges of some mountains are very round and shiny, showing the vicissitudes of the years and the traces of long-term rubbing.

The pen holder is an ancient writing tool, used for people to put the brush between writing and painting when thinking or taking a break, so that the nib is not worn, and it also prevents the brush from rolling and slipping off the calligraphy and painting. The texture is jade, porcelain, wood, stone, etc. There was a hollow stone pen holder during the Five Dynasties period in China. Since then, the pen holder has rapidly developed into a must-have for literati. Due to different styles, it is divided into a pen mountain, a pen bed, a pen pillow, and a pen hanger. This pen holder can also be called Bishan because of its overall shape as a multi-peak mountain. A Bishan is like a three-dimensional painting and calligraphy. It not only has the practical function of holding pens, but also takes into account the aesthetic function of appreciation, reflecting the aesthetics and the penetration of taste into the making of ancient literati.

Since the Tang dynasty, literati have had the affection of mountains and rocks. In the Song and Yuan dynasties, it has become a fashion to use natural ingenious stones to make pen holders, and it is also very popular for literati to give pen holders to each other.

10. The Eighth Year of Emperor Qianlong in the Qing Dynasty• Stela of Permanent Ban on the Illegal Mooring of Ships in Wuxi 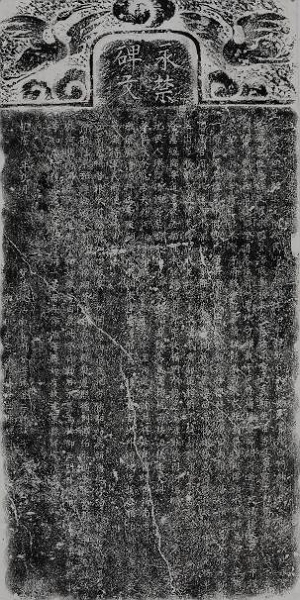 The Eighth Year of Emperor Qianlong in the Qing Dynasty• Stela of Permanent Ban on the Illegal Mooring of Ships in Wuxi
140×69 cm
Current address: Wuxi Inscriptions Exhibition Hall

In Wuxi, due to the illegal mooring of watercrafts at the lane of West Bridge, blocking the river channel, residents were disturbed and mooring was banned forever. It reflects the crowded river course and the busy river transportation at that time, it is an important place of Wuxi historical monument.

11. Qing dynasty, The Record of A Channel Cutting Lvliang in Cursive Handwriting on the Stone Stele 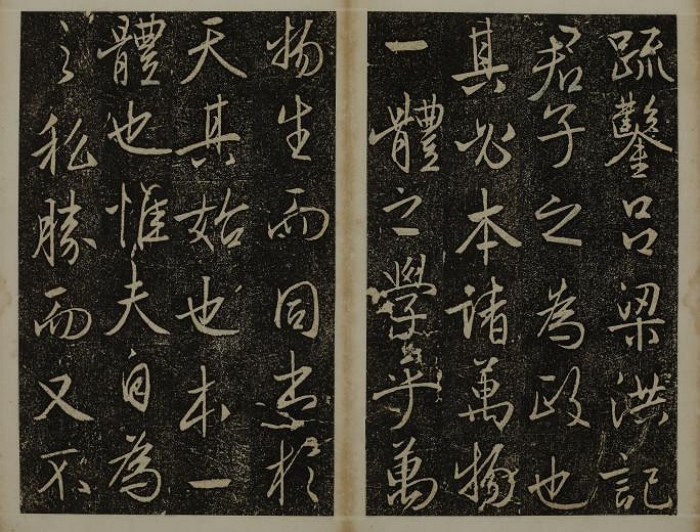 Qing dynasty, The Record of A Channel Cutting Lvliang in Cursive Handwriting on the Stone Stele
31.8×17cm 31.8×17cm
Collection of Wuxi Museum Donated by Mr. Zhou Daozhen in 1987

This record has nineteen pages, with the two pages of quotations, and it is Shi Yuguang's seal character " The Record of AChannelCutting Lvliang".

The stone stele is existing in Fengguan Mountain, southeast of Xuzhou City, Jiangsu Province. It was built in the twenty-fourth year of Jiajing in Ming Dynasty (1545).

In the Ming Dynasty, Lvliang was an important road for transportation between the north and the south. A large amount of grain from the south was transported to the capital through this.Although the Tang and Song dynasties dredged Luliang, they were not completely cured. Until the Jiajing period of the Ming Dynasty, a 40-mile-long waterway was excavated on the west bank of the river and a stone gate was built to smooth out the strange rocks in Luliang. Only then did the passing ships be able to navigate safely.The stele " The Record of AChannelCutting Lvliang" describes the construction of Lvliang by Chen Hongfan, the capital of Jiajing Jiajing (1544). The inscription was written by Wen Zhengming. It is full of art value.

12. The eighth year of Xianfeng in the Qing Dynasty, Stele of transportation of rice banned by offical in the town of Xijinliang

The eighth year of Xianfeng in the Qing Dynasty, Stele of transportation of rice banned by offical in the town of Xijinliang
137×66 cm
Current address: Wuxi Inscriptions Exhibition Hall

Because the merchants of Mi market jointly sued the town officials for transportation of rice to the capital by water, which made the Ya market lost money. In the town of Xijinliang, it was banned as official command. It is reflecting the vicious and insatiable viciousness of government officials extorting merchants and citizens, it is an important piece of Wuxi local historical inscriptions. Maoxin Flour Company was founded in 1900 by the pioneers of national industry and commerce, Rong Zongjing and Rong Desheng. It was the earliest enterprise founded by the Rong family. It was formerly known as Baoxing Flour Company, later renamed Maoxin Flour Company. The "Bingchuan brand" flour produced was well-known throughout the country at that time, and it was also exported to Britain, France and other countries and various parts of Southeast Asia.