The Suzhou section of the Grand Canal is one of the earliest canal sections excavated in the Jiangnan Canal. It has undertaken important tasks such as water transportation and commodity transportation at home and abroad for more than a thousand years. During the Tang and Song Dynasties, Suzhou was an important producing area of grains. During the Ming and Qing Dynasties, Suzhou was an important collection and starting place for grains. The main river system of "Three horizontals and four straights" formed in the ancient city of Suzhou since the Song Dynasty has survived to this day. The Suzhou water system created an urban layout with parallel water and land in the ancient city and adjacent river streets, and directly contributed to the world-renowned Suzhou gardens.

Section One, The key canal, connecting North and South

During the Sui and Tang Dynasties, Suzhou was located at the forefront of the canal, and its economic status was rising day by day. Tombs of this period have been found in Suzhou's Pingmen City Wall, Wuzi Mountain, Hengtang, Loufeng and other places. The unearthed relics are in the style of Nanjing and Beijing, reflecting the blend of North and South cultures.

01. Scroll of the Beijing-Hangzhou Grand Canal

Paper, painted, folded. The first volume of this scroll is from the capital, and the end of the volume is at Shaoxing. The focus is on the prefectures, counties, mountains, lakes, rivers, and places of interest along the route. The overall scroll frame is beautifully drawn with concise technique. 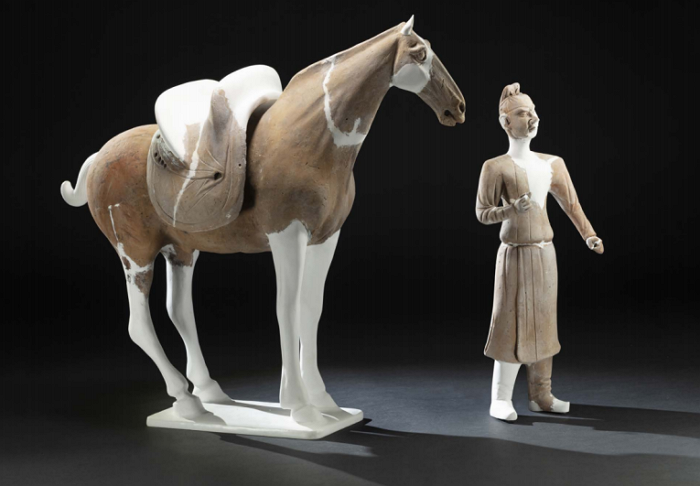 Tang Dynasty, Ceramic paint, pottery figurine with horse
The horse is 54.5 cm in length and the pottery figurine is 39.5 cm in height
Collection of Suzhou Museum Unearthed from Tang Tomb of Xinxing Brigade, Hengtang, Suzhou

In this work of pottery figurine, the man and horse are all made of terra cotta. The figurine, leading a horse, has a high nose and deep eyes, wearing a long sleeves shirt with tight collar, a leather belt tied at the waist, and high-waisted leather boots. The horse is standing on a rectangular pedal, with a complete saddle, a small head, and a large breast and buttocks. It is a typical image of a Turkic horse. 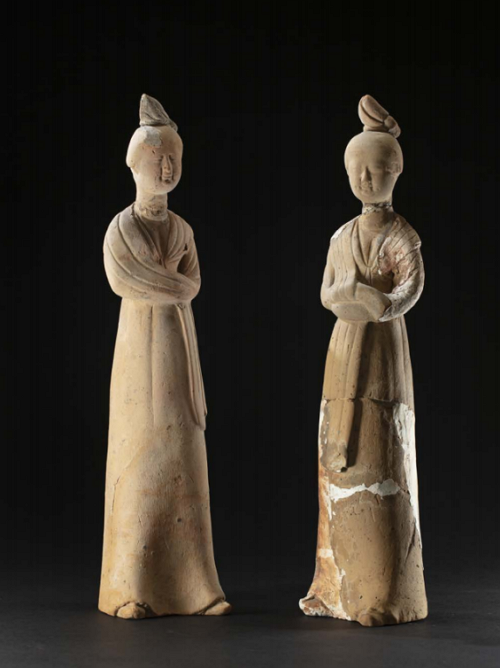 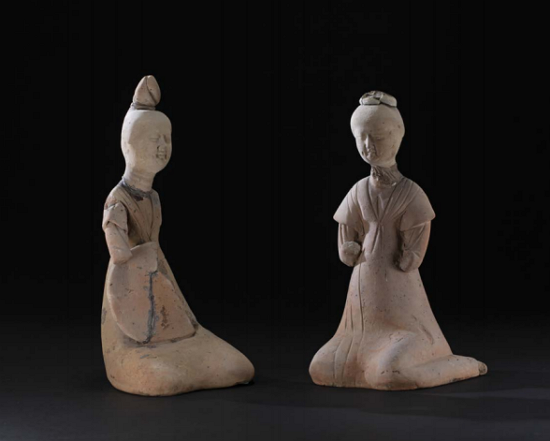 Red pottery, Co-modeled. Both have high combed hair, wearing a floor-length skirt. Sitting with half his legs, playing pipa and other musical instruments. The standing figurines are wearing silk, with their hands folded on their chests, as if they are listening to wonderful music. 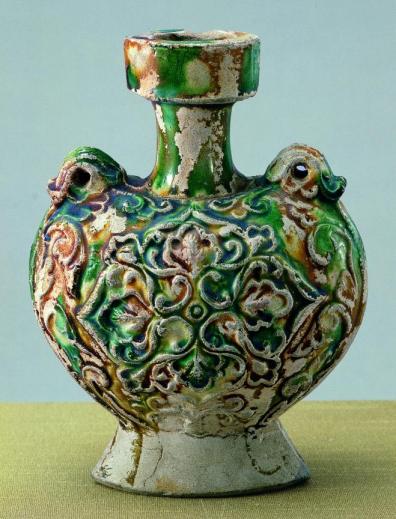 The cup-shaped pot has an olive-shaped cross-section with a thick opening, a long neck retracted inward, a flat body and two mandarin ducks on the shoulders. The front and back sides of the body are decorated with imprinted flowers and white tires. Applying yellow-brown, green and white, three-color glazed, which is bright and clear. The base is full of no glaze.

The canal nourishes the ancient city of Suzhou and forms a unique landscape belt. Scenic Views such as Wumen, Huqiu tower, Maple bridge, Panmen and other scenic spots have been praised since ancient times, forming a unique landmark of the Suzhou Canal. 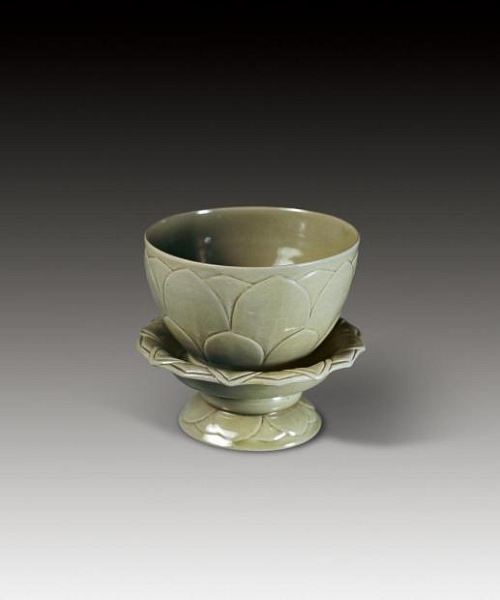 This Olive-green Porcelain Lotus Bowl is composed of two parts: bowl and tray. The bowl has a straight opening, deep chamber and round base. The tray is shaped like a bean, the surface is turned outwards, the waist is tied, and the round base is curled outwards. The outer wall of the bowl, the surface of the tray and the round base are decorated with double-petaled lotus flowers, like a bas-relief-like protrusion, which is cleverly conceived, just like a blooming lotus. From the place where is exposed, it can be seen that the porcelain is off-white, delicate and dense, and the particles are uniform and pure. Especially its glaze color is moisturizing and restrained, showing the warm and moist feeling like jade, it is considered to be the standard ware of Olive-green porcelain during the Five Dynasties and Northern Song Dynasty. 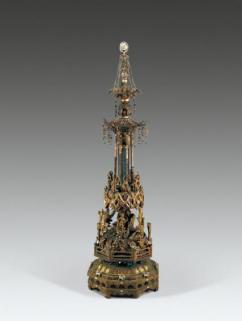 When it was unearthed, the treasure pagoda was placed in two layers of wooden letters. On the front wall of the black outer wooden letters, there were two rows of white lacquered scripts: "Treasure pagoda with pearl sarira in the third-story tower of Ruiguangyuan".The main body of the pagoda is made of nanmu, which is divided into three parts: the Xumi base, the Buddhist palace, and the pagoda. The Xumi base is octagonal, with a double-layer square underneath, and an upward arc converges. A silver lion, a semicircular carving supporter and a wooden lion are separated in the middle. The upper part of the Xumi base is set with a hook fence, and the sea is inside. Xumi Mountain rises from it, and a beaded nine-headed dragon hovering between the mountain and the sea. Eight wooden auspicious clouds rose above the sea, and the cloud heads were carved with wood carvings of the Four Heavenly Kings and Four Heavenly Women. The Buddha Palace is at the top of Mount Xumi, and outside the palace there are eight god guardians. In the palace, there are the octagonal scriptures of the golden script, which are respectively filled with the names of the seven Buddhas inscribed in true, grass, clerical, and seal scripts, and the Sanskrit ‘Nanwu Maha Prajna Paramita’, which means great wisdom can reach the other shore paradise. In the middle of the pagoda is a light-colored gourd-shaped porcelain vase used to enshrine sarira and two engraved plates of Mahā-pratisāra. There is a wood-carved statue of Buddha sitting in the niche on the roof of the pagoda. There are eight temple pillars outside the Buddha Palace, and the pillars support the roof and corners of the octagonal bucket arch beam room. There is also a lacquered niche on the top of the hall, which contains a gold aquarium. An octagonal gold and silver wire beaded canopy is covered on the niche, and there are eight small dragons woven with gilt and silver wire on the cover. The upper part of the canopy is made of white jade, crystal, gold and silver. Eight silver chains hang down from the brake and are connected to the octagonal corner of the canopy. The top of the pagoda is a large crystal ball with a diameter of 3.4 centimeters. The two sides of the ball are wrapped with silver wire, which is glittering with gold, which means "Buddha light shines". With the precious material selection, unique conception, and beautiful shape, Pearl Sarira Treasure Pagoda combines the professional skills of wood carving, gold tracing, jade carving, beading, and gold and silver craftsmanship. The whole treasure pagoda shares more than 40,000 pearls, which embodies the wisdom of skilled craftsmen at that time. With hard work, it is a precious religious artwork. 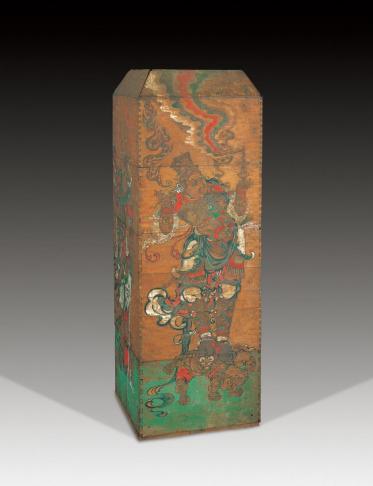 In 1978, it was discovered in the Tiangong on the third floor of the Ruiguang Temple Tower in Suzhou. The Pearl Sarira Treasure Pagoda is placed in this wooden box. The wooden box is made of ginkgo wood and is a five-section square telescopic type. In its inner wall, there is the words "April 18th Diary in the Sixth Year of Dazhong Xiangfu (Year 1013)", and the outer mural has a painted portrait of the Four Kings, which is a rare masterpiece of Song Dynasty paintings. The Four Kings are evenly proportioned, their facial expressions are exaggerated, their images are vivid, and their momentum is majestic. The rich natural colors give the picture a sense of reality and movement. The legacy of the Tang dynasty painter Wu Daozi can be seen everywhere in the painting. The brush and ink are vigorous. With the willow leaf drawing method, the lines are vivid, smooth and full of changes, making the whole painting almost perfect.

Wen Zhengming (1470-1559), was originally named Bi, styled Zhengming, and later changed to Zhengzhong, and he was named Hengshan Jushi and was born in Changzhou (now Suzhou, Jiangsu), served as the imperial edict of the Hanlin Academy.He studied poetry and essays from Wu Kuan, learnt calligraphy from Li Yingzhen, and paints from Shen Zhou. He is well known as calligraphy, especially painting, which is as famous as Shen Zhou, and respected in the history of painting as the master of the Wu School, one of the four Ming dynasties. The first half of "Three fantasticpaintings" depicts the mountains above the water that extends into the water, and the second half depicts the waterscape of Shihu Lake. There are three "Shihu Poems" inscribed by the author at the end of the volume. It is a fine art and a collection of poetry, calligraphy and painting, depicting the scenery of Shihu Lake.

Wenjia (1501-1583), styled Xiucheng, named Wenshui, was born in Changzhou (now Suzhou, Jiangsu).Second son of Wen Zhengming. Inheriting family learning, working in regular script in small characters , good at painting landscapes, crisp brushwork, coloring landscapes, with beauty and elegant. He is also good at identifying ancient calligraphy and painting. This scroll depicts the eight scenic spots of Wujiang River, the scenery of the Chuhong Pavilion Bridge. The long bridge stretches across, the water and the sky are bare, the clouds and mountains are smoked, the sails and sandbirds are free, making the artistic conception fascinating. The composition is plain and the brushwork is simple and elegant. Written in the 20th year of Jiajing (1541), when Wen Jia was 41 years old.