Section Three, Rich in resources and abundant in people

After the opening of the canal, Jiangnan's economy became increasingly prosperous. Since the Song and Yuan Dynasties, "Up in heaven; there is paradise; down on earth; there are Suzhou and Hangzhou". During the Ming and Qing dynasties, Suzhou became a convergent area with one government. The life of the people is rich and elegant; the celebrities are rich and romantic, It is the most prosperous and romantic place In the world of mortals.

Mozhu took the Northern Song dynasty Wentong as the master, and collected his great achievements in Yuan Dynasty.This scroll is composed of ink bamboos painted by six artists, including Zhao Tianyu, Ke Jiusi, Zhao Yuan, Gu An, Zhang Shen, and Wu Zhen, and mounted on a long scroll, including two parts by Ke Jiusi.It seems that the bamboo is surround in fog, or the old branch stretches obliquely. It is also looks like the dragon's horn, or the slender bamboo. Sometimes as a tumbler, Sometimes as a wind tail.Thousands of forms are shown, which can be called a concrete and subtle history of the ink bamboo in the Yuan Dynasty.This scroll has been handed over by Xu Shouhe, Zhang Jianyang, Qiao Chongxiu, Jiang Guangxu, Li Hongyi, and Gu Wenbin. Before the present revision, there are signatures by Jiang Guangxu and Wu Dawei, as well as the introductory chapters of Qiao Chongxiu, Zhang Tingji, and Wu Changshuo. After the original scroll, there were eight inscriptions by Sheng Lin and Ni Zan, which were later removed (now in the Shanghai Museum).In the original scroll, there is still a picture of Gu An, but it is lost, and Gu Wenbin is equipped with a picture of Wu Zhen in his home.The second volume of Miao Yuezao's Allegory Records, and the sixth volume of Gu Wenbin's Guoyunlou Calligraphy and Painting Records. Appreciation stamps include the white seal of ‘Xiang Molin Appreciation Chapter’, the seal carved in relief of ‘Jianyangzi Collection‘ , and the white seal of ‘Approved by Jiang Guangxu’.

Zhongjing is also called "Zhongjing", one of the official crown made during the Jiajing period of the Ming Dynasty. This Zhongjing crown is a funerary object, unearthed in the tomb of Wang Xijue. Wang Xijue, from Taicang, Suzhou. During the Wanli reign, it was used for grand secretary of the cabinet, with the posthumous title Wensu. The descendants of his family have come forth in large numbers, and their influence has lasted for hundreds of years, such as the famous painting masters Wang Shimin and Wang Yuanqi, and the literati Wang Song, etc., there is a saying of "Four generations are all the highest official rank in imperial China". The outer crown is melanin suede, and inner crown is linen. There are two mountains in the back. The crown is flat and slightly higher in the middle. The five beams on the crown and the ruyi pattern on both sides are pressed with gold threads from the both sides and back side of the crown, and the crown is bordered by gold threads. 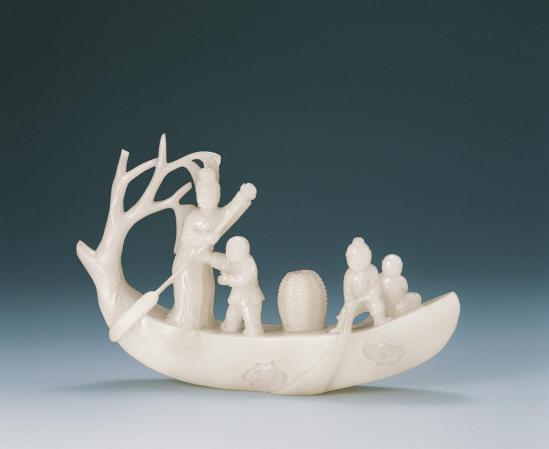 The jade is lustrous and delicate with curved willow branches, standing at the tail, and the bottom and sides are carved with water patterns. Four people are standing on the Branch: the woman holds the oars at the back, and a child stands beside her, innocent and cute. The old and the young are happily casting nets to fish. Fish and shrimp were caught and filled in a large bamboo basket carved in the middle. Combining various techniques such as round carving, relief carving, and positive carving, the figures are lifelike and finely crafted. 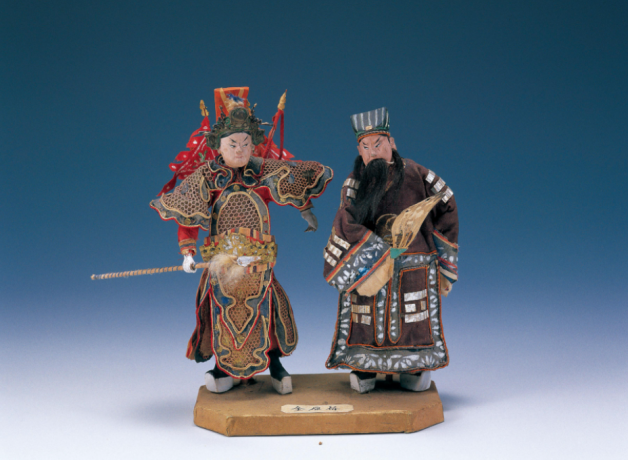 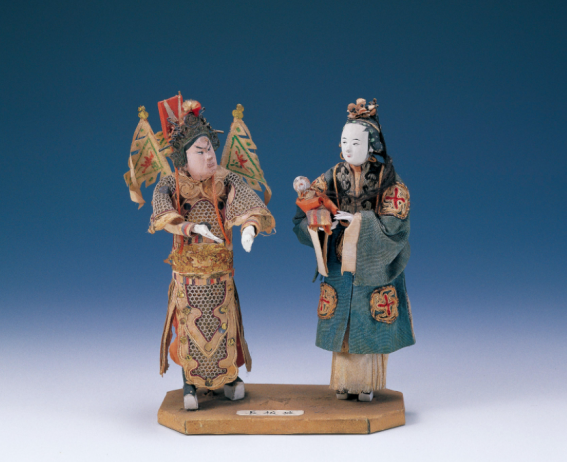 The cloth clay figurines are modeled on the traditional opera repertoire "Yang Paifeng", "Jinyan Bridge", and "Changban slope" three ancient costume excerpts as prototypes."Yang Pai Feng" creates laosheng (an old gentleman) and caidan (a clown who plays the role of a female). The laosheng wears an official crown with three beards, a yellow "open cloak" suit, and thick-soled boots with a fan on his chest with his right hand. Caidan wears red skirt jacket pants and a yellow long belt. Stretch her left hand forward and pick her right hand sideways."Jinyan Bridge" creates wusheng (an actor playing a martial role in Chinese operas) and laosheng. Wu Sheng was wearing red "Da Kao" clothing, holding a gun with one hand stretched out, and wearing thick-soled boots.The laosheng wears a dark "Bagua clothes", a "Bagua towel" on his head and three beards. He holds a goose feather fan in front of him with his right hand, and wears thick-soled boots with his left hand behind him."Changbanpo" creates a wusheng and a qingyi (a female role). Wu Sheng was wearing yellow "Da Kao" and thick-soled boots, and stretched his hands to the left. Qingyi wears a pleated pleated dress and holds a baby in both hands.The heads of the characters are made of clay, the faces are painted in color. The hands are kneaded. Some of the heads are made of clay, and some are made of paper, silk, thread, etc., and the clothing is made of paper, The silk and thread are pasted, braided, and made with color outline patterns, and the limbs are supported by bamboo, wood and other objects.Kun Opera, the ancestor of a hundred operas, originated in Suzhou and has been popular along the canal since the Ming and Qing Dynasties. This group of opera clay sculptures vividly reflects this grand occasion.

In the Qing Dynasty, Suzhou's handicraft industry was unprecedentedly prosperous. Under the organization of the Ministry of Internal Affairs, Suzhou Weaving and other official offices, Suzhou silk weaving, jade carving, gold brick firing and other craftsmanship were mostly used in the palace.Through the canal, Suzhou's fine and elegant handicrafts and skillful craftsmen continue to be sent to the capital. 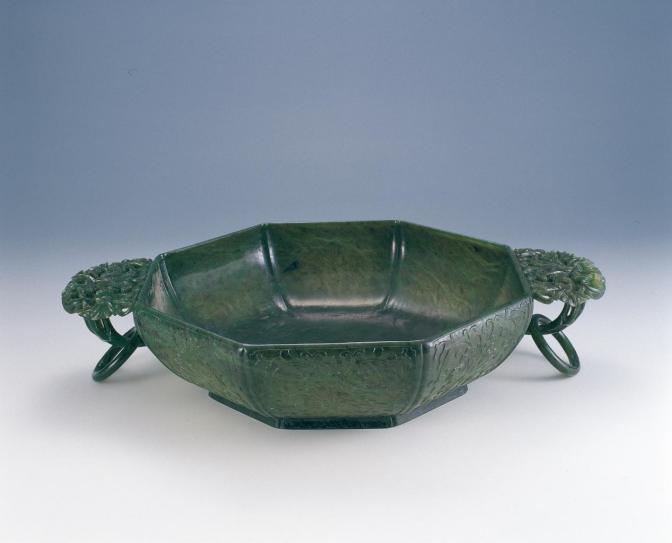 The jade is spinach green, with uniform thin walls, high transparency, superb polishing skills, and neat production.The outer wall of the double-eared movable ring is cut with branches and lotus, which is a metaphor for the cleanliness of the official, which lasts for generations.During the Qing Dynasty, Suzhou was already the center of the national jade handicraft industry. The folk jade shops were very prosperous. Especially during the Qianlong period of the Qing Dynasty, the sound of jade sand could be heard everywhere in the Zhuxiang area of Changmen, Suzhou.

02 Red and gold brocade with word of 卍 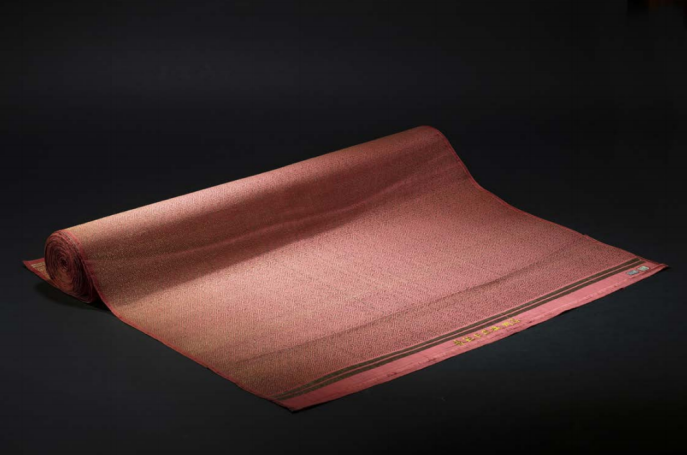 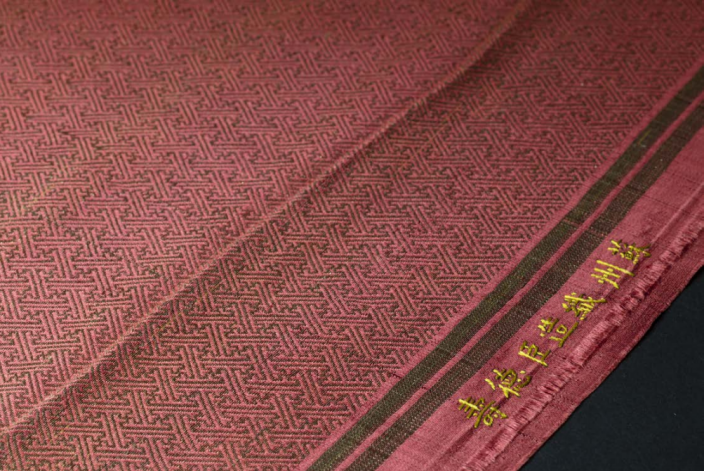 Brocade is one of the traditional silk fabrics in China. It was developed on the basis of Jiangnan brocade at the end of the 19th century.This brocade is a real gold silk brocade woven in Suzhou in the 33rd year of Guangxu (1907), with the words "Suzhou Weaving Chen Deshou" on it.In the Qing Dynasty, the textiles, embroidery, and satin garments undertaken by the Suzhou Weaving Bureau were used as an official way, and went northward through the canal into Beijing. This brocade was transferred from the Palace Museum to the Suzhou Museum for preservation in 1974.