Robert van Gulik高罗佩 (1910-1967) was a well-known Dutch writer, sinologist and diplomat famed for bringing back the Chinese Tang dynasty hero Judge Dee in his historical detective novels, which enabled readers around the world to delve into and experience the traditional Chinese way of life. In China, Judge Dee is the protagonist of films and television series and van Gulik is revered as one of the world’s greatest sinologists of the 20th century. 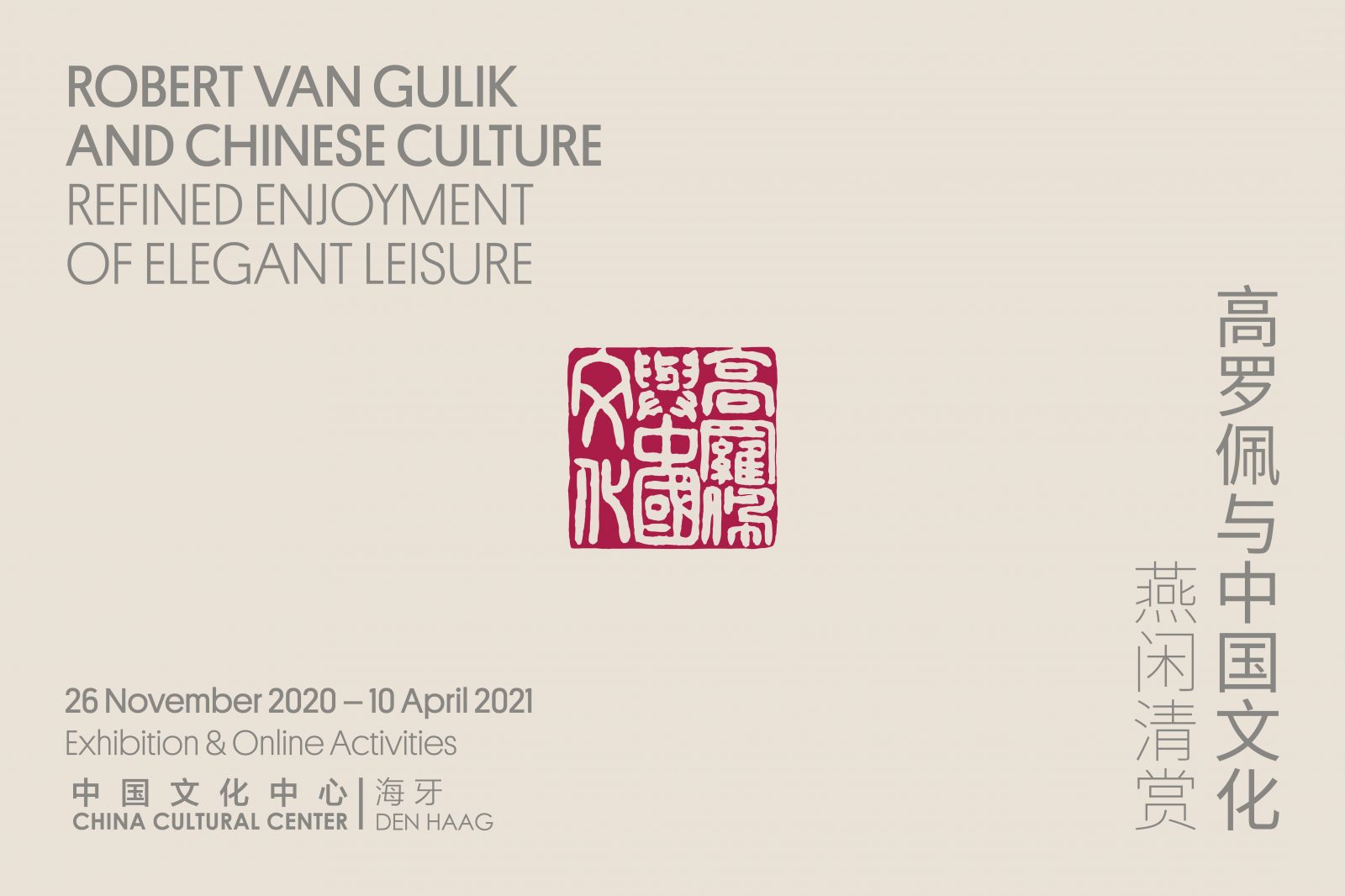 On 17 December, China Cultural Centre in The Hague successfully held the online opening of the exhibition Robert van Gulik and Chinese Culture, Refined Enjoyment of Elegant Leisure. The exhibition will be held till 10 April 2021. The opening ceremony was co-chaired at the same time by  Director of the Centre, Mr. Huang Hongchang, and guest curator, Ms. Marie-Anne Souloumiac.

Mr. Huang firstly introduced the concept and initiatives of the exhibition. He said, "In order to commemorate the 110th anniversary of the birth of the famous Dutch sinologist and diplomat Robert van Gulik, and to inspire the younger generation in the Netherlands to continue their enthusiasm for Chinese culture, China Cultural Centre in The Hague is delighted to present Robert van Gulik and Chinese Culture, Refined Enjoyment of Elegant Leisure, this exhibition will also be complementing the exhibition taking place at the Rijksmuseum Robert van Gulik en Zijn Passie voor Chinese Kunst at the same time."

Pauline van Gulik, daughter of Robert van Gulik, was the only invited guest on site the exhibition hall of the Centre for the online opening event. She noted in the opening speech, "Wherever my father was stationed around the world, the first thing he would do upon arrival in his new home was to locate a room for his study, carefully placing his books in the exact order he wanted them to be, his next step was to decorate his study in such a way that it would echo the taste of a Chinese literati scholar with all its attributes, calligraphy and  musical instruments etc. Some of which are on display here.”

The online opening event also featured a special live viewing session, where the curator Marie-Anne led online guests on a live tour of the exhibition. The exhibition recomposes Van Gulik’s adventurous persona in three distinctive chapters. It invites the public on a journey into Chinese art and culture, by discovering van Gulik as an artist and a collector next to his accomplishments as a writer, scholar and diplomat. The exhibition brings together personal objects from the Estate of Robert van Gulik along with his unique Judge Dee drawings and their Chinese sources; other highlights include pieces from his Chinese painting collection belonging to a private collector. It also features the award-winning documentary by Rob Rombout On the Track of Robert van Gulik which introduces characters around the world – artists, writers, diplomats, sinologists - whose lives took a turn after they encountered the universe of Van Gulik. 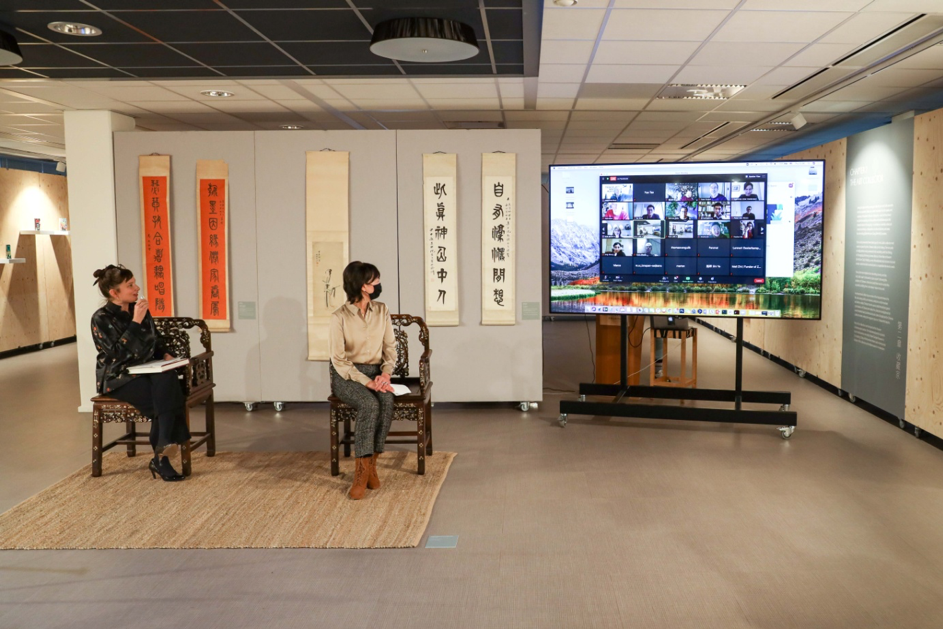 and interacted with Zoom guests online (Photo by Sandra Uittenbogaart ) 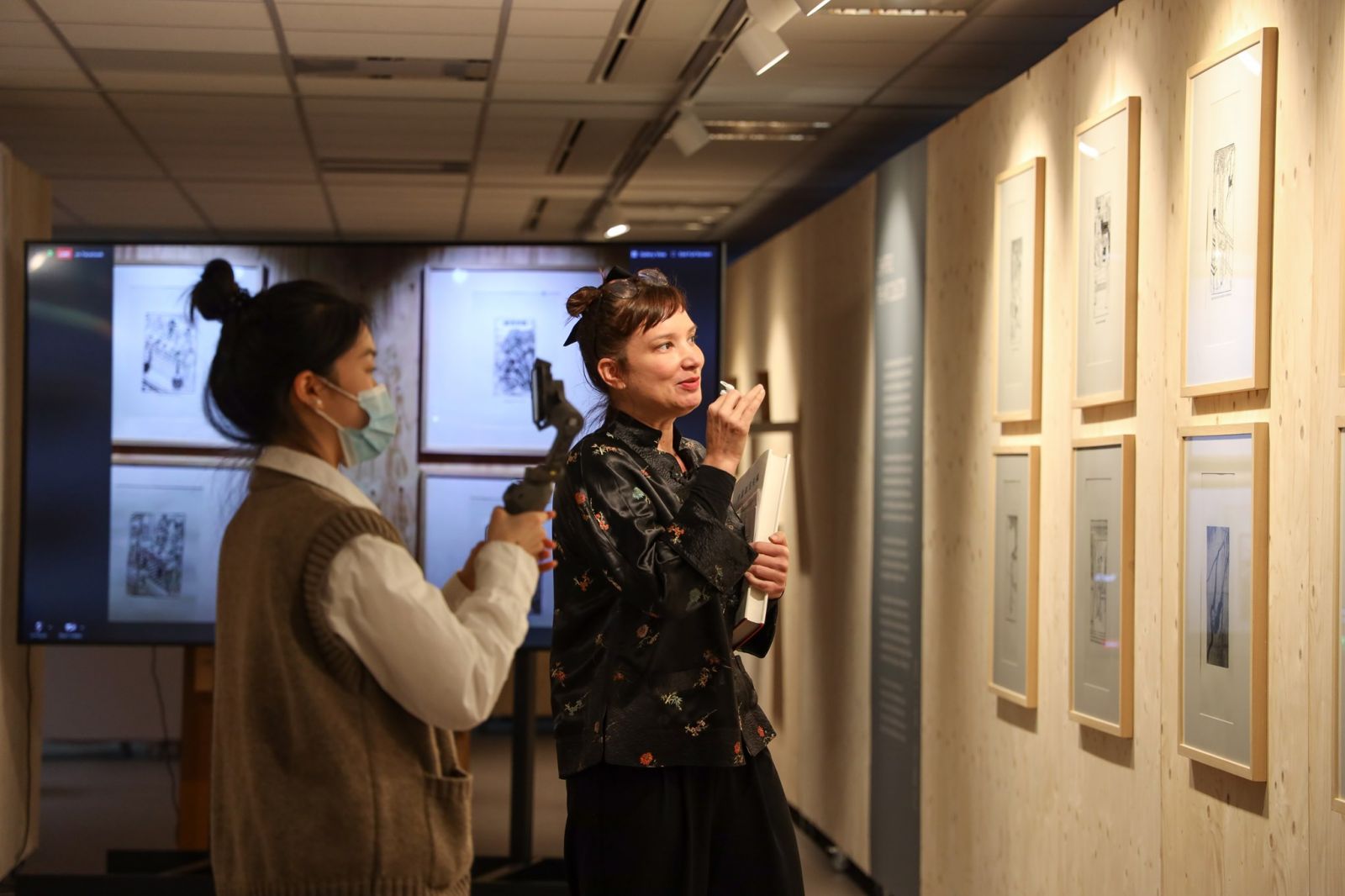 at the online opening event (Photo by Sandra Uittenbogaart) 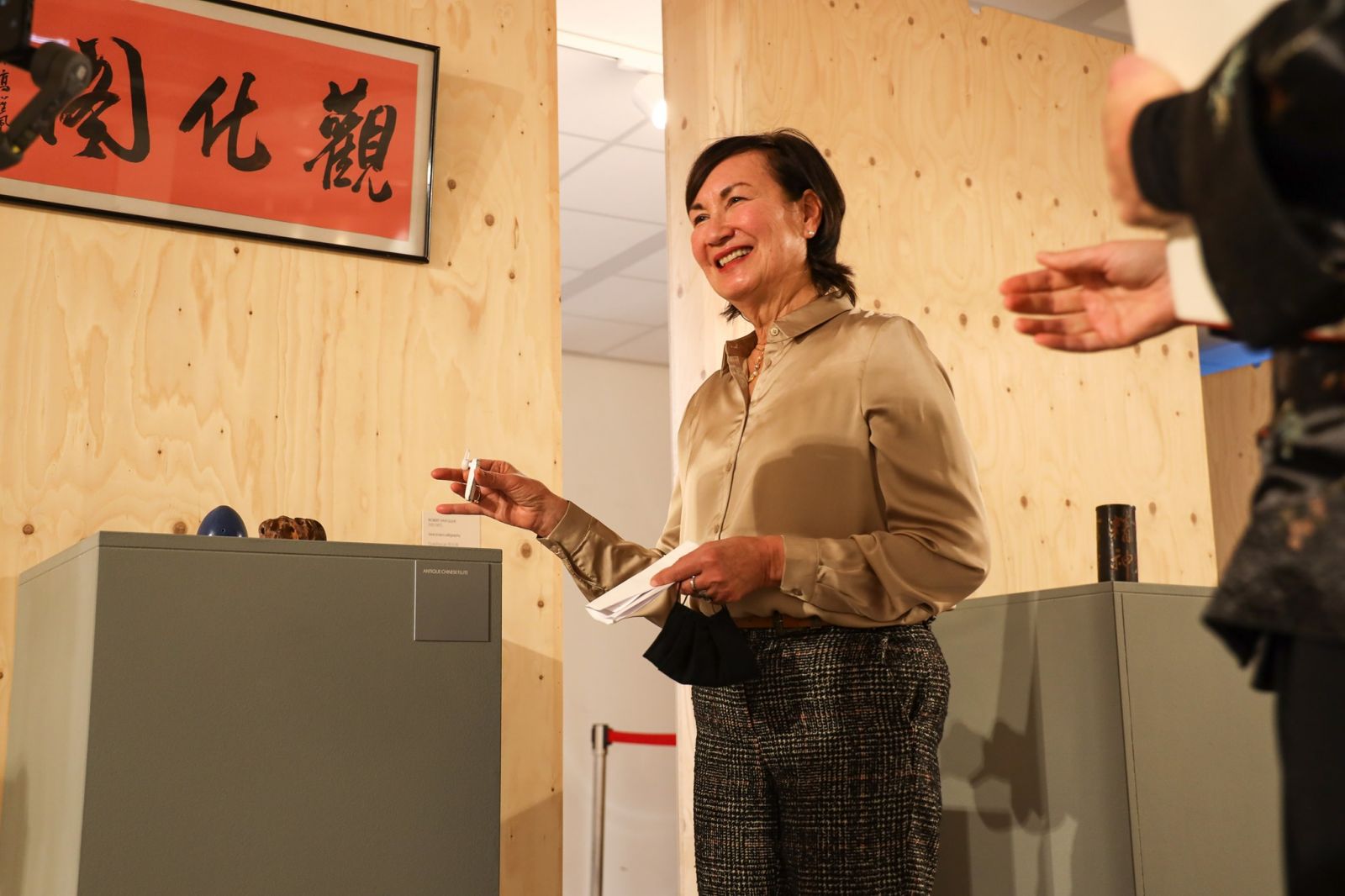 Mr. Rob Rombout (on screen)  tells about  his documentary "On the Track of

Mr. Huang concluded, "China Cultural Centre in The Hague is presenting both online and offline events on the theme of Robert van Gulik, with the hope to commemorate the birth of this extraordinary man, and further more to stimulate a wider discussion and exchange between China and the Netherlands. This event is the last one planned for 2020 and will be the first online event of 2021. Due to the epidemic and recent lockdown in the Netherlands, the Centre plans to organise a series of online lectures, seminars and workshops in the first quarter of next year. Stay tuned for updates on our website and relevant social media pages."

A Selection of Exhibits 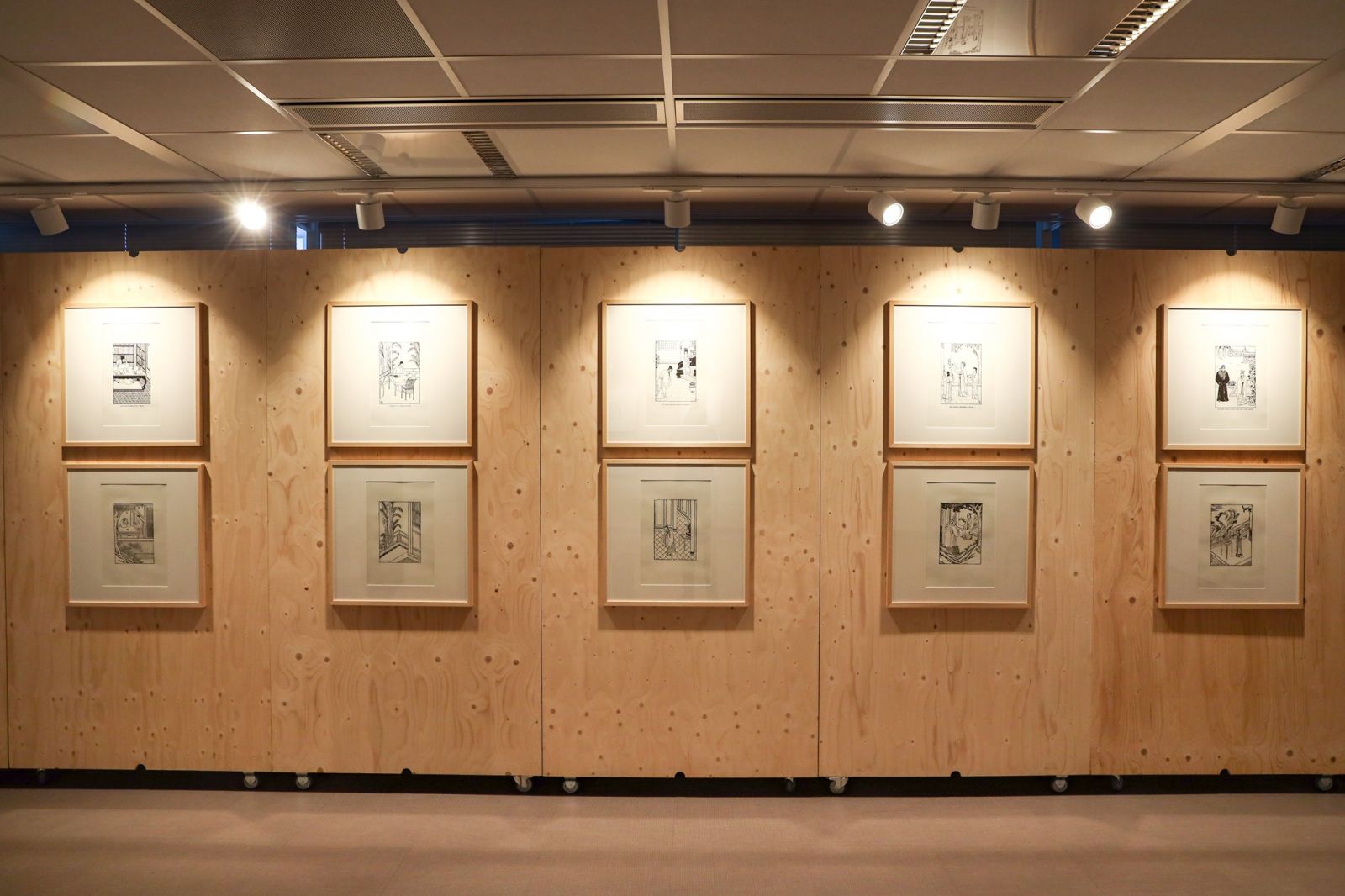 JUDGE DEE ILLUSTRATIONS AND THEIR SOURCES 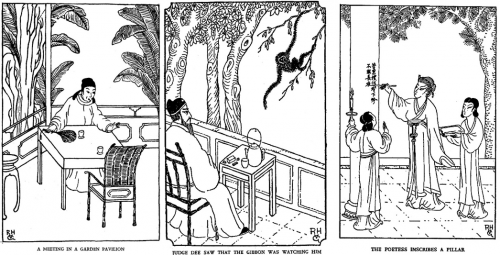 Please note: Due to corona-related regulations and recent lockdown according to the Dutch government, the centre is closed till at least 19 January 2021. You can follow Facebook, Instagram, WeChat or visit the Canter’s official website for event information. You can also schedule a future visit by sending email to : info@ccchague.org. The exhibition will end on 10th April, 2021. Meanwhile, we invite you to explore more of our online activities, which will be shortly announced.